YOU SHOULD GET MARRIED

You should get married.

There are a million different Hallmark-esque reasons that most people tell you that you should (“Because great love comes but once a…” ZZZZZZ “Because when you look into her eyes…” ZZZZZZZZsnore) but I’m going to concentrate on the more pragmatic reasons why you should. It will sound incredibly boring and pedantic but the point is, ok, that this article will end with a picture of a baby goat. I promise. Are you ready? Ok. Great.

Chances are, if you’re reading this (which you are! congrats!), you were brought up in a society largely influenced by American ideals. No. Stay with me. Stay awake. This gets better.

Think about the show Friends. It’s largely predicated on the fact that if you date people then you’ll find “the one” and that then you’ll be happy for the rest of your life. This is also the basic plot of most Disney movies and is also the thought process that has been beaten into your/our head(s) since, oh, I don’t know, the printing press was invented. As much as we like think that we live in an advanced society, the truth of the matter is that we simply live in a society with a lot of advancements. But we’re still hung up on this moralistic side of things — the one that suggests, hey, “fucking a whole bunch of people is bad”.

You may wonder: where are you going with this, writer-person? I’m going… (grabs ahold of door handle)… here.

So lets break it down to the two basic reasons why people don’t get married: a lot of people worry — not trying to be crude here, just honest — about missing out on sexual experiences or (ahem) “finding something or someone better.”

Let’s look at the former first: A sexual experience is a five to fifteen second knee shake and a whole lot of cleaning up.

YOU: Wait. Is that all sex really is?

ME: Then jump in your time machine and go to town. Sex is a lot more about power than it is about sticking your genitals in / on / all over someone else. And if power is what turns you on, marriage isn’t for you. And you’re a lamp.

If you’re still in the mindset where you want to have sex with other people then you should get that out of your system before you get married. Not to sound incredibly reductive here, but think about it like it’s pizza. Once you commit to your favorite pizzeria, you will not be able to get so much as a slice from anywhere else. You have to be completely sure that you really love the pizza you want to commit to because if you so much as nibble the crust from another pizza joint you’re in for some deep (dish) shit when you get back home. Sex is, in several senses and tenses of the next three words, a fucking minefield.

And, fuck, hey. Maybe you’re the rare white-whale type of couple who can pull off an open relationship. If you can well and truly pull that off then none of this applies to you: you can sample the wares and fruits of another, so to speak, without repercussion. But we bet you’re probably feeling a little lonely when you’re three glasses of wine in and you’re saddling up to the person next to you at the poolside bar asking if they “want to be the third.” It is your correspondent’s opinion that these types of people are not necessarily to be trusted and should be left with their own kind at parties with bowls of keys and Nag Champa burning to the muffled sounds of a Tori Amos CD (definitely a CD, not an mp3) playing in another room.

Now let’s look at the latter: you’re scared about missing out on something or someone “better.”

Decades of well-intentioned but ill-informed romantic comedies have told us that “there is someone out there for everyone.” It is a nice thought, but it isn’t a very practical way to go about your lovelife. People read “someone” as “one person” and therefore think that there is one person — on the entire fucking planet — that is just waiting and hoping for them to come along. Stop whatever notion you have that that is correct. Only an idiot or a narcissist would believe that. And even though I have (repeatedly) been called both, I can assure you that this “one true love” thing is 100% false. Not to sound like Carl Sagan after a bong-rip, but here’s an important lesson: People happen to other people.

I met my wife at the tail-end of one of the shittiest months of my entire life. Within 9 days, I lost my job, a family member, and gotten dumped by someone with the emotional capacity of a tambourine. I was in a place where I had no ego. That, I think, is what made it work. I couldn’t get in the way of myself. I was forced to shut the fuck up and meditate on the amazing woman that (eventually) became my wife. Disclosure: I met my wife because she rented a room in my apartment. She literally showed up on my doorstep one day. I realize that other people may not be so lucky, but the sentiment is true: you never know what’s going to happen next. Because people happen to other people. And once you have a hold on that idea, anything is possible.

YOU: A-ha! But you just said “you never know what’s going to happen next”! Isn’t that true for “the one?”

ME: For the contrarian voice that I’m writing for an article you sure are fucking stupid. You literally just walked into my third point. Ultimately, if you’re thinking that you’re going to find someone better along the way, marriage isn’t for you. Marriage is work.

Marriage is work… but it is a fun, if challenging, job. You wake up and you’re in it: you’re making coffee or tea for two, not just yourself. You have to put the wants and needs of the family unit over the wants and needs of your own. Do you enjoy action movies and she loves reality tv? Find a middle ground. Do you love black tar heroin and she’s more of a white wine gal? You gotta make a choice there, champ.

For some people, understandably, this is torture.

YOU: (disappears into a chasm of pornography and badly written social media think-pieces about being single forever)

Marriage is a fun job. You get to wear a ring — like a superhero! — and you get to have a partner in crime — like a detective! — and you even get to share a bed with someone — like an adult!

Ultimately, marriage is about the balance between you to find the right unit as a whole (apologies if that sounds clinical, but it’s true). If one person’s personality or needs outweighs the other, you’re not ready. If you’re still at a point in your life where you really like / need a lot of alone time, you’re (probably) not ready. If you have a genuine addiction or strong emotional connection to (don’t laugh at these, and be honest with yourself because it will matter further down the line): spending, drinking, drugs, or pornography… you’re definitely not ready. Those are all habits that can take you away from them either mentally or financially. You have to be there for your family. Period.

My wife is one of the smartest people I know, but she’s also hugely emotionally intelligent: she can read me like a fucking book and knows when to back off… and when to pile on. The last thing you want to do is get married to a theremin that you can’t get close to, or on the other end of the spectrum, a stage-five clinger that won’t let you go.

Marriage might carry with it an outward expectations — the Facebook (ugh) posts, the wedding pictures, the industry that bridal magazines rely on, etc — but it is very much between you and your partner. A lot of people forget that before they get married, and for a lot of people that’s all they can concentrate on while they’re thinking about getting married. It really is about the bond between you much more than it is about how you might think other people think you look on your wedding day.

Finding the balance is a wonderful thing. For me, at least, and the several other married couples that I know, finding that balance has made us much stronger than we were apart. That, I think, is the best part about being married.

(P.S: I wrote and then deleted an analogy about a car… that there’s an engine and a transmission and both work with each other to make the car a car. That is a lot like marriage. Sometimes you need work. Sometimes they do. But ultimately you work together. See why I deleted it? Me too. But the point has legs. Which is another analogy. Let us exit this analogy cul-de-sac.)

It is also worth noting, that much like a car, especially a mid-to-late 2000s Cadillac with a Northstar engine…

I think the biggest misconception in “marriage” is that people think that it is the be-all-and-end-all of love, sex, and all that jazz. That it is (erroneously) some sort of goal that, once attained, is going to solve everything. It won’t.

You’ll have fights. You’ll have arguments. One or both of you will cry at some point because the other person said some shit that was way, way over the line. That will happen. It will suck. But because you are working together, you’ll overcome it (and the offending party will apologize to the other and the other will get over it because THAT IS WHAT ADULTS DO). There are apologies you’ll have to make and concessions that they’ll have to deal with. Marriage is somewhat political in that aspect.

This all might sound terrifying. But I can assure you that, on a base level, it works beautifully. There’s an emotional honesty in marriage that is so fucking earnest and pure that I know, definitively, that it is doing good in the world. It’s a little like religion in (specifically) that way. And, like religion, it isn’t for everyone.

Marriage wont fix you. But it will heal you in ways that you might not expect. There’s probably 50 think-pieces out there saying otherwise (with ill-conceived titles like “It Happened To Me: I Stayed Single Forever And Now Have Great Blood Pressure And Several Million Dollars”) but, quite frankly, it has worked for millions of people for thousands of years. Maybe there’s something to it.

Anyway. Here’s that picture of a goat. 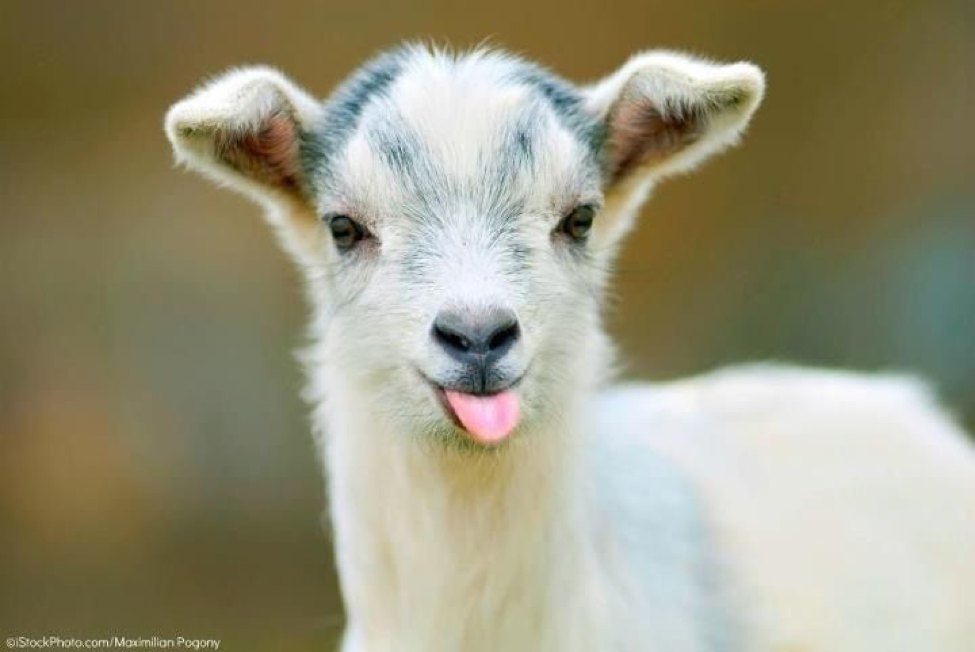 Keep your existential crisis in check
with our selection of job and
lifestyle ideas, delivered right to
your inbox.